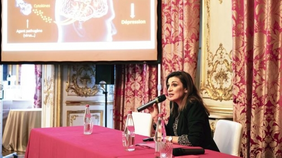 Research director in Nutrineuro lab, Lucile Capuron won the 7th Marcel Dassault price the 4th of december, 2018. She is the first woman to obtain this price (300 000€). This price is attributed by the scientific board of the FondaMental fondation with an international jury.

Lucile Capuron, at the head of the Nutrition et Psycho-neuroimmunologie team, is focused on the role of inflammation in some pathological forms of depression.

Read the article on Le Figaro (in french only)

Foundation of the International Research network...

She defended her PhD

For her research on mental diseases

Neuroinflammation and how to study it - June...