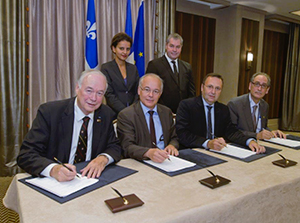 The IAL is a partnership between French and Canadian public laboratories that shares the same objectives. It is thus considered to be a laboratory “without borders”, allowing its research deliverables to be utilized on a global scale.

The co-directors of OptiNutriBrain have a history of successful and synergistic partnership, due to their collaborated work and student exchanges. The Neurophenols consortium and the NUTRIVIE project (Nutrition and brain aging: study on the effects of vitamin A and omega 3 PUFA supplementation on mnesic performances) are both examples of successful collaborations. These two projects aimed to understand the impact of liposoluble nutrients (omega-3) and fruit extracts on memory deficiency linked to normal and pathological aging.

Dr Layé’s and Dr Calon’s multidisciplinary research teams are complementary and world-renowned, which thus brings the IAL OptiNutriBrain to the forefront of nutrition and brain health research.

With OptiNutriBrain, the goal is to play a leading role in the areas of great importance of nutrition and brain health.